Tips for keeping your church secure

If your church is like many, everyone and their mother-in-law has a key. Securing the building means limiting access, or at the very least posting notices on doors instructing folks not to access the building without permission, and to lock up behind themselves.

They've been around for a long time, and for good reason. Smoke / CO2 systems are generally required by code for commercial spaces. Beyond that, professionally installed forced-entry systems typically monitor several things: doors, windows and interior motion are among the most common. Some systems will also include glass-break detectors and volume level monitoring. These systems usually require a monitoring service that will alert key personnel and police if an alarm is triggered.

Forced-entry systems can but don't necessarily need to monitor an entire building. You can avoid a cost prohibitive installation by monitoring key areas, like an office suite.

Basic surveillance is recommended even when buildings have regular occupancy, but especially when they are unattended for longer periods of time. Knowing where you need surveillance depends on your unique situation. If sensitive areas have an alarm system with monitoring, surveillance may not be necessary.

To start, determine what areas are most vulnerable and where surveillance would be of most benefit. Start small, with an eye toward possible future expansion. If you choose a professional installation, they will assist you in this process, but if you're on a budget, keep reading.

You're looking for faces

Cameras installed too High or at too great of a distance. may capture a person, but they may not be identifiable by the back of their head.

In order to get into a building or sensitive area, a person would likely need to gain access through a door or window. Cameras should cover an angle that will capture authorized and unauthorized entry. Interior cameras should face the door, as interior-facing cameras will only capture faces of those who have already been in the building. Exterior cameras protecting a building should be aimed at approaches to doors. If protecting an entire building, be sure to install cameras at each entry point. If you're monitoring an inner area, such as an office, a camera aimed toward the entry points would suffice

If you're anything like me, watching live footage of a new video surveillance system is novel - for about a half hour. You likely won't have someone doing that more than on occasion to 'check-in.' The camera system you choose should be able to record at least two weeks (ideally a month) worth of footage for later reviewing (depending on your needs.)

Many consumer-focused systems will have a 'Cloud Recording' function integrates, wherein footage will be continuously uploaded to an internet server that will store your data and perform other functions like facial recognition, motion detection and alert triggering. Cloud based recording generally requires a monthly subscription fee.

Typically, on-site (non-cloud based) digital video surveillance systems will cyclically store footage, recycling the space of older recordings and rewriting the space with new footage with the available data storage is exhausted. You may opt for continuously recording systems, which generate large amounts of footage that will likely go unused, or you may choose to use a commonly available feature in network-connected systems: Motion Triggered Recording. Motion based recordings will analyze footage continuously, and when a significant change in the image is detected, they will record images several seconds before the motion occurs, and a certain amount of time after it occurs. Motion based recordings are generally more useful and allow you to store the most useful footage.

Many on-site recording systems also have internet connectivity, allowing you to have the same features of cloud-based recording, but without the fee. Beware of recording systems that rely on your computer to record footage. Some camera systems come with free recording software, but most 'off-the-shelf' computers do not have storage devices (I.e. hard drives) that can sustain continuous recording. Solid State Hard drives (SSD's) are generally not recommended, and traditional disk-based hard drives are designed for intermittent writing. Western Digital (for example) offers a hard drive that is specifically designed for continuous recording.

Your needs and willingness to get technical will help you decide what kind of recording system you use, but in general: keep it simple. The more moving parts and maintenance your system requires, the less reliable it will be.

In New York State, surveillance may not be installed in place where privacy is assumed. Changing areas, restrooms, and even personal offices should avoided. Hidden cameras even in common interior areas should not be considered. Most states require a notice indicating that video recording is happening.

It's a can of worms. Many consumer systems intended for homes will record audio. This is ok for a private home because you install the system and occupy the space, but for a commercial space, there are some legal sensitivities to be aware of that don't necessarily apply in the same way as video.

In New York State, audio recording in some circumstances is akin to wire-tapping. People occupying a space where audio recording *must* be alerted to the matter. Offices where private conversations may occur should absolutely not have equipment that is capable of recording audio, even if that functionality is disabled. Besides legal implications, recording audio especially in areas where counseling may occur is a serious ethical misstep.

Supplying power to cameras is a mundane but important detail to consider. On the consumer end, there has been a rising popularity of battery operated cameras. They're easy to install, and the batteries will often last for up to a year. But beware: battery (low-power) camera systems often have drawbacks. Record lag can occur when motion-triggered events happen in quick succession, which may cause the system to fail to record in certain scenarios. Most battery powered systems do not record continuously, and rely on cloud-based archival for image analysis. Constant-power systems usually are more capable and have more on-board capability.

Ok, you've made it this far, let's look at some recommended equipment. The premise is this:

Need a Hand? Contact George at The Atlantic District do discuss options and support available to you from the district. 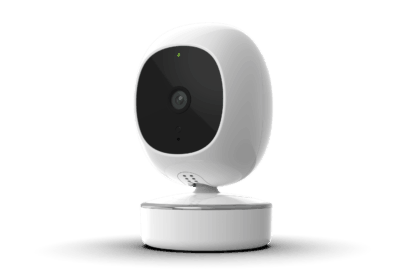 There are two models available: the 1s, and the Alloy. This system is unique in that it performs like a cloud-based system, without monthly fees. Both SimCam cameras have the following features:

That's it so far for recommendations. If you come across another, please contact us.

of the Lutheran Church—Missouri Synod

Engaging the World with the Gospel of Hope